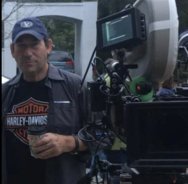 Adams grew up in the Boston area, graduated from The Roxbury Latin School, went to the University of Vermont for a year, and attended the Harvard Extension School. After school, Adams worked for several political campaigns, including two gubernatorial campaigns, a race for attorney general, and a presidential campaign. He garnered valuable film production experience directing television commercials for a Boston advertising agency, then co-wrote and directed his first feature film in 1989, "A Fool And His Money" (originally titled, "Religion, Inc."), which starred Sandra Bullock, Jonathan Penner, George Plimpton and Jerzy Kosinski (released through Trimark Pictures - now Lions Gate). While making that popular independent film, he was mentored by Norman Mailer, considered one of the greatest novelists of the 20th century. He is also credited with discovering Bullock, casting her in her first leading role.

Adams then went on to write and direct his second feature, the critically acclaimed "Primary Motive," which starred Judd Nelson, Justine Bateman, Richard Jordan, John Savage and Sally Kirkland, for Twentieth Century Fox. His third feature, which he also wrote and directed, was a comedy entitled "The Mouse," starring Rip Torn and John Savage, and released through Strand Releasing. "The Golden Boys," was released through Roadside Attractions and Lions Gate Films in 2009. Also in 2009, he directed the feature film, "The Lightkeepers," from a script he wrote. "The Lightkeepers" was released through New Films Cinema in the spring of 2010. His latest film, "An L.A. Minute" which he also co-wrote with legendary satirist/journalist Larry "Ratso" Sloman, starring Gabriel Byrne, Kiersey Clemons and Bob Balaban, was released in theaters in August 2018 through Strand Releasing.

Adams is the recipient of numerous awards and honors. His film, "The Lightkeepers" was chosen as the closing night film for the Palm Springs International Film Festival, the opening night film for the Boulder International Film Festival, won the "Golden Angel" award (best picture) at the Los Angeles Chinese-American Film Festival, was named #2 Best Grown-Up Love Story Of The Year (2010) by AARP Magazine, and won the 2010 "Best Musical Score for a Comedy" award by the International Film Music Critics Association. He has also received praise from the actors he has directed. Two-time Academy Award nominated actor Bruce Dern has compared Adams' directing style to Hal Ashby and Alfred Hitchcock, and commented, "He (Adams) is on the threshold of becoming an extremely interesting commodity in this business because he's really old-school - he's an old-school filmmaker." And Academy Award winning actor Richard Dreyfuss has been quoted, "Daniel is a smart man, who truly understands the old values of filmmaking... He is an excellent writer and perhaps enough people will see "The Lightkeepers" to appreciate that."

As a novelist, he conceived, edited and contributed to the serial novel, "Out Of The Fog," working with a dozen of the nation's best-selling authors. Also a historian, he is writing a biography of American patriot James Otis, Jr. and is preparing a television mini-series on the same subject entitled, "The Mad Patriot." He is the co-writer on the upcoming movie, "Panama" starring Mel Gibson and Cole Hauser and will be directing and co-writing the feature drama, "The Walk" with Matt Dillon. He is also developing a television series based on Norman Mailer's last novel, "The Castle in the Forest."